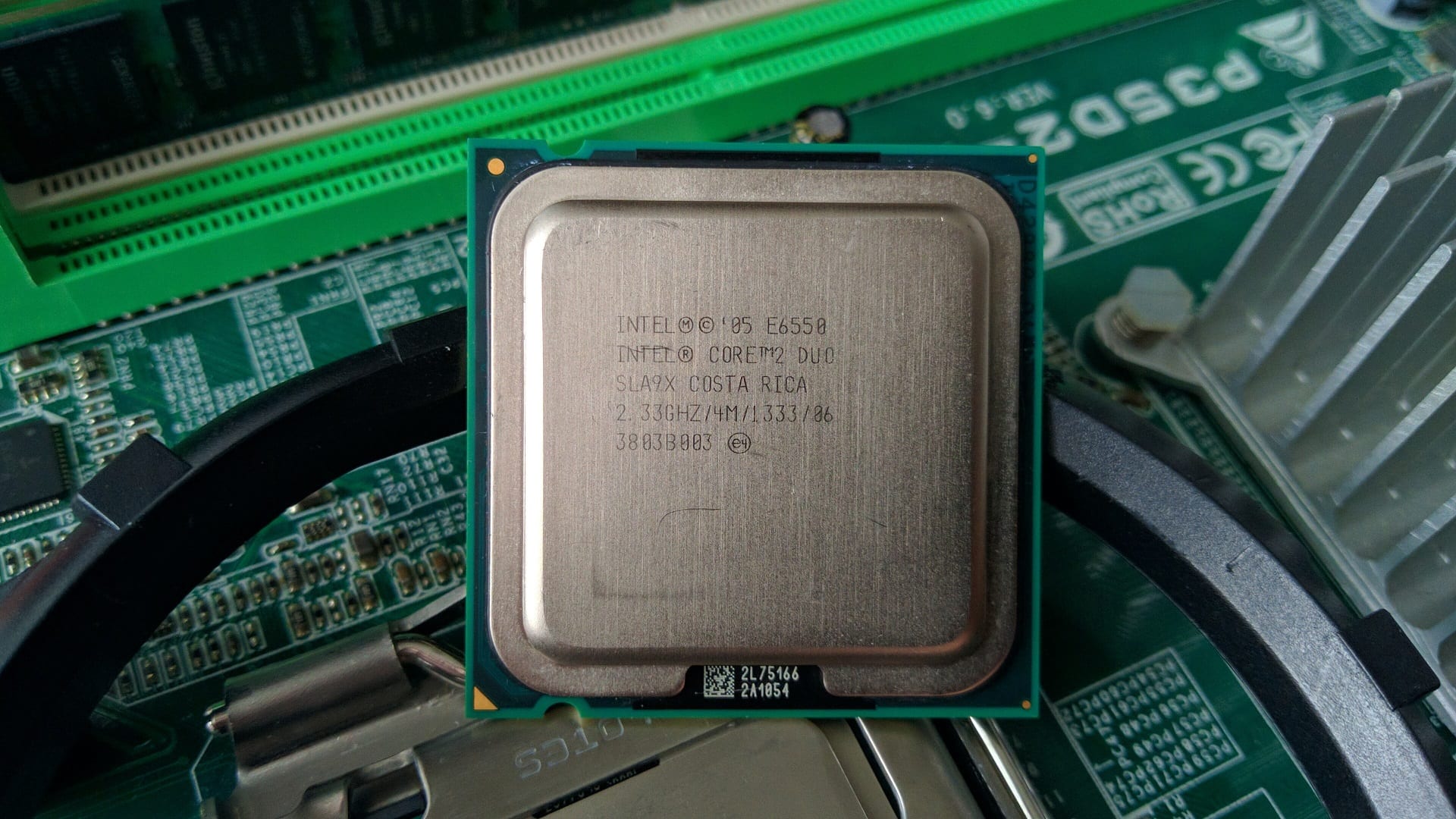 In this article, we will conduct a study of the overclocking potential of an old Intel Core 2 Duo E6550 processor, as well as check the advisability of overclocking an outdated CPU outside of sports interest.

Welcome to the fifth article of the Retro Overclocking series.

Test specimen marking SLA9X, country of origin Costa Rica. The production of chips labeled SLA9X began in early 2007, and the last batch was shipped in 2010.

The codename for the Core 2 Duo E6550 is Conroe (Penryn architecture). Under the heat spreader cover of this CPU is one dual-core 65nm 4M Conroe die.

The revision of our test sample is G0, which is good news since G0 is the best possible revision (here we are talking about the overclocking potential and the processor’s greediness. In addition to revision G0, there is also B0 – the worst and B1 – relatively good).

Due to the nature of the LGA 775 platform, the Core 2 Duo E6550 supports both DDR2 and DDR3. This is because the RAM controller is not in the processor, but in the north chipset. In our case, this is P35. This set of system logic can work with both RAM standards, however, it is the DDR2 slots that are soldered on the test motherboard.

Of the obvious disadvantages of the E6550 processor, it is worth noting the lack of support for the SSE4.1 / SSE4.2 instruction, which is the minimum required at the moment. And believe me, this is a very serious disadvantage, because due to this feature, this chip may simply not even start the program or game you need (although in the case of the E6550 it is rather strange to talk about modern games).

But that’s not all:

The Core 2 Duo E6550 chip has an extremely poor ratio of 7 multiplier to 333 MHz bus frequency. This particular feature of this CPU makes conquering a really high frequency a very difficult task. Judge for yourself:

First, to successfully overclock processors with a low multiplier, you need a solid (to put it mildly) motherboard that can operate stably at a system bus frequency above 450 MHz.

Secondly, to maximize the profit from the final overclocking, you need either good DDR3 RAM (and, accordingly, a motherboard with DDR3 support), or, taking into account the specifics of the platform, excellent DDR2 RAM.

And thirdly – a good copy of the processor itself. After all, the overclocking potential of the FSB bus depends not only on the motherboard. If a sample that has fallen into your hands refuses to start at the system bus frequency of 440-460 MHz, your chip rested on the so-called FSB Wall. And this, unfortunately, is actually a verdict. In other words, it is extremely difficult to move the FSB Wall aside in the vast majority of cases (without excessive voltages and extreme types of cooling).

In addition to the FSB Wall, there is also such an indicator as the FSB Hole – a hole in the system bus frequency at which the chip cannot start. In this case, if your CPU does not start, for example, at 470/471/479, or 480MHz, try setting the frequency to 490, or 500MHz. Perhaps you are lucky and further overclocking will go like clockwork. But these are special cases and they occur relatively rarely.

However, even if you somehow manage to solve all three of the above problems, one more, very serious and unexpected feature of old systems with an LGA 775 socket may stand in your way. But first things first. Let’s start overclocking the Core 2 Duo E6550 chip.

To begin with, let’s figure out what our sample of the E6550 chip is capable of with the base voltages of cores, RAM, and FSB bus. If you don’t understand technical processes, processor generations, and so on, don’t despair. In order to find out what your CPU model is capable of in theory, you just need to find out the codename of its core (in our case it is Conroe), after which it is just to “google” the top model based on the same core.

The fastest processor, codenamed Conroe, is the Core 2 Duo E6850. Its frequency is 3000MHz, which means that in theory (I repeat, in theory), our chip is also capable of stably operating at 3GHz. Let’s check it out:

Reboot, test in LinX and we see that the processor is stable at 3000MHz:

Let me remind you that I did not raise any of the supply voltages. In fact, such overclocking should not harm the processor, motherboard, or memory, even in the long run. However, remember that any overclocking will void the warranty for this or that product. Thus, you do all manipulations with your hardware solely at your own peril and risk!

Further, we still do not raise any of the supply voltages, increase the FSB frequency by 5MHz, reboot, test the chip in LinX for stability, and if the test succeeds, add 5MHz to the FSB and test it again.

The result of the study of the overclocking potential of our Core 2 Duo E6550 without raising the voltages was the frequency of 3322 MHz:

This is far from a record result since the results of other enthusiasts can be found on the network, where the frequency of the cores without raising the voltage turns out to be close to 3600 MHz. But there’s nothing you can do about it. Unfortunately, we have what we have. However, overclocking is primarily a lottery.

Now let’s try to raise the supply voltage a little and add a few hundred MHz to the frequency.

This completes the full overclocking of this processor on the Biostar P35D2-A7 motherboard. And you, probably, will rightly say: “How so? After all, you just started to increase the voltage and did not even get to the increase of the FSB and DRAM voltage!” And you will be absolutely right. Right now, we got to that unpleasant feature of old motherboards with an LGA 775 socket, which does not allow raising the system bus frequency above 485 MHz with any voltages/timings, and so on.

But first, a little remark:

In 2006-2010, the amount of RAM in 1-2GB was the standard for which it did not make much sense to go out. In fact, any games of that time (GTA 4, Prototype, Saints Row 2, WarHammer, Star Wars: The Dorce Unleashed, etc.) worked on this volume without any problems. Thus, motherboards and their BIOS were tuned specifically for small amounts of RAM, and work with 4-8 gigabytes was not at all announced by some manufacturers.

Can you guess where I am going?

But let’s do this: instead of a thousand words, I will give a real example. I will change 2 strips of 2GB to 2 strips of 1GB and try to set 500MHz FSB:

And voila! The processor and motherboard began to respond to the increase in vCore and vFSB voltage! The frequency limit with two 1GB RAM modules has been pushed back to 3500MHz.

Unfortunately, I have not a single 512MB DDR2 module left and I will not be able to demonstrate to you what I described in my 2012 article on overclocking the Core 2 Duo E8400. But you have the opportunity to read that article, where on the same board (literally, on this sample), I managed to squeeze 529 MHz FSB.

Nevertheless, I still managed to make a “screenshot of death” at a frequency of 3625 MHz:

By the way, this frequency corresponds to 96th place in the Core 2 Duo E6550 chip rank (relevant at the time of this writing):

Well, I think it’s pretty clear that there is virtually nothing to test with 2GB of RAM in 2021. After all, even 4GB of RAM is now practically not enough for anything. Therefore, I would like to bring to your attention a small comparison of the performance of the Core 2 Duo E6550 chip at frequencies of 2330MHz and 3392MHz.

The smallest advantage of the overclocked Core 2 Duo E6550 over the stock one was obtained in FarCry 3. However, it should be noted that in this game any dual-core processor shows extremely weak results.

But in CS: GO and WoT, a very impressive increase in the frame rate of ~ 60% was obtained. Moreover, overclocking the processor to 3392 MHz made it possible to get a completely playable frame rate in both projects.

Want to see a comparison between the Core 2 Duo E6550 and the Pentuim D 930, or the Athlon II X2 260? Write about it in the comments of this article! If there is enough feedback on this, I will definitely conduct appropriate testing.

If this article turned out to be useful to you and you would like to see more similar tests on the UmTale Lab resource, then please support our site on Patreon! The main goal of fundraising is to expand the component park and improve the quality of testing: replacing the bench drive with a larger SSD, buying a capture card to reduce the impact of gameplay recording using ShadowPlay on the final results, and so on).