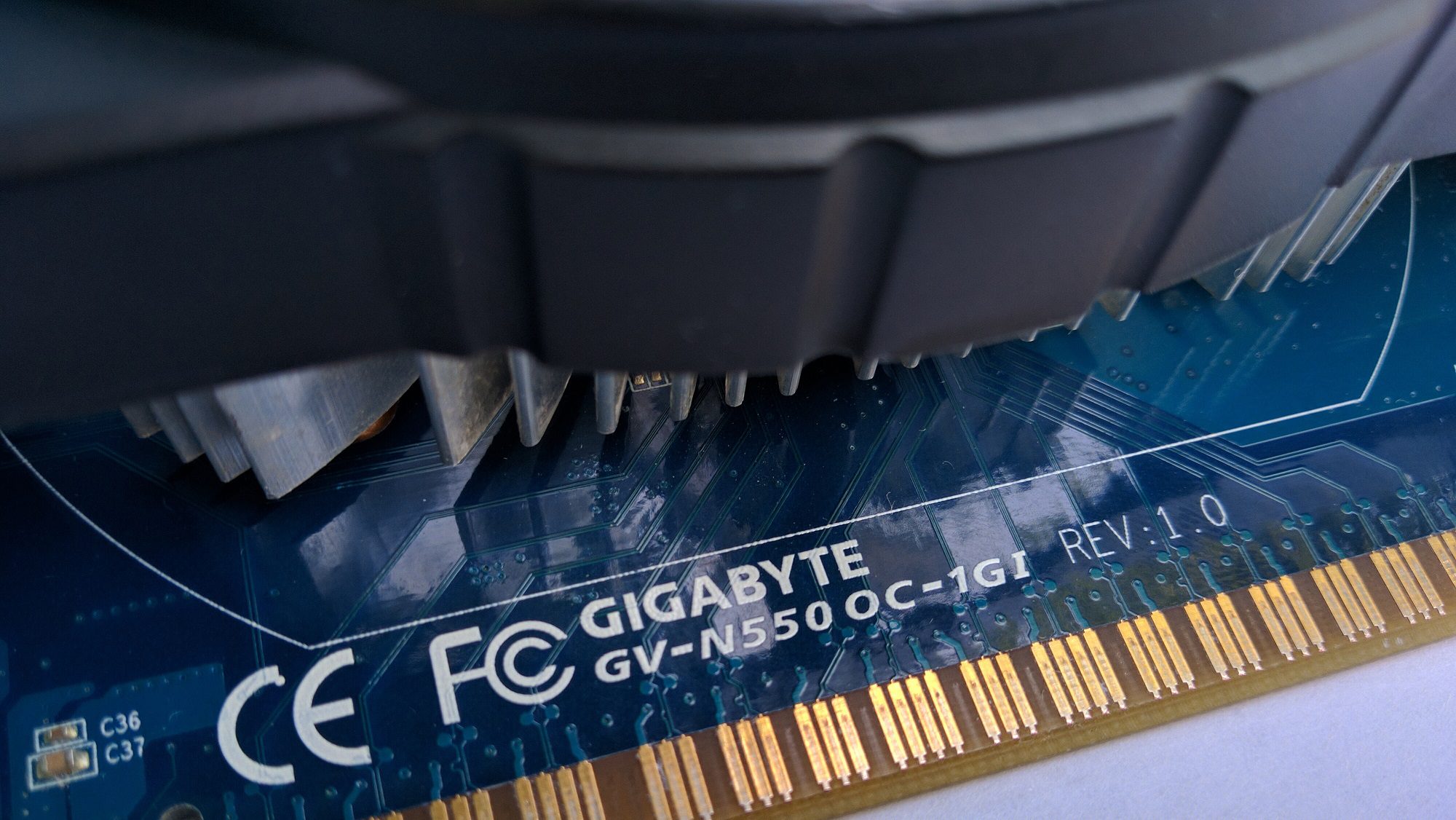 In continuation of our new and for some time now constant column “Surviving at the bottom” we will consider a budget graphics card from 2011 GeForce GTX 550 Ti. In this material, we will look under the radiator of the cooling system, conduct a small study of the performance of the card in 12 games and try to overclock the above-mentioned graphics adapter.

The GIGABYTE GV-N550OC-1GI graphics adapter received a two-slot design, a length of just over 22 centimeters and a proprietary Ultra Durable printed circuit board design (high-quality components and an increase in the amount of copper in the power layers). The card is powered by one 6-pin auxiliary power connector. This means that in practice its power consumption should not exceed 150 watts. And according to the official specifications of NVIDIA, the GeForce GTX 550 Ti consumes up to 115 watts, so there is a small margin for power consumption for further overclocking.

The GPU of the video card is cooled by a small fan-shaped aluminum radiator with a copper insert and a large 100mm fan. Unfortunately, this graphics adapter does not provide for video memory cooling, which can adversely affect the overclocking potential and the lifespan of GDDR5 chips.

A small aluminum radiator is responsible for cooling the power subsystem:

Exactly like the vast majority of adapters based on the Fermi architecture, our test subject also does not have a rich number of video outputs: the GV-N550OC-1GI is equipped with only two DVI connectors and one mini-HDMI:

Board and power system

Photo of the printed circuit board GV-N550OC-1GI:

The GV-N550OC-1GI model has a relatively good GPU and video memory power subsystem (for a budget device), built according to the 3 + 1 formula (3 phases for GPU power and one for GDDR5).

The powerful NCP5395 PWM controller from ON Semiconductor, already known to us from the GV-N470SO-13I graphics card, is responsible for phase control.

As a graphics processor, the GTX 550 Ti received a full version of the 40nm GF116 chip in a configuration of 24 render units, 32 texture units, and 192 stream processors.

This, by the way, is a rather interesting feature of this card: The GeForce GTX 550 Ti video memory controller is capable of working with memory chips of different sizes, which makes it a unique card of its kind.

The base frequency of these microcircuits is 5000 MHz, however, in the case of the GTX 550 Ti, the manufacturer set the frequency at around 4200 MHz, which, in theory, allows us to rely on a good overclocking potential of video memory.

According to NVIDIA factory specifications, the GeForce GTX 550 Ti must operate at 900/1900 MHz for the GPU (core/shader domain) at 1,000 volts and 4100 MHz for the GDDR5 video memory. However, the GV-N550OC-1GI sample presented in this article is overclocked from the Gigabyte factory and operates at slightly higher frequencies: GPU – 970/1940 MHz at a voltage of 1.025 volts and GDDR5 video memory – 4200 MHz.

The GPU-z utility confirms all the above characteristics, adding to them the information about the support of the GTX 550 Ti for technologies such as OpenCL, CUDA, OpenGL 4.6, PhysX, and DirectX 11. The DirectX 12 API is not officially supported.

Is it possible to play Control on a 10-year-old budget graphics card? Yes, hell yes! With a few exceptions, the GTX 550 Ti achieves a console frame rate of 30 FPS and is relatively comfortable to play with a gamepad. If we are talking about a mouse with a keyboard, then not everything is so smooth here. Most gamers will probably have to lower the resolution a little more.

Counter-Strike: Global Offensive runs smoothly on the GTX 550 Ti. The average frame rate is at the level of 96 FPS, and the minimum rate does not fall below 77.

Dota 2 on the GTX 550 Ti shows a similar picture to CS:GO. The game runs as stable and smooth as possible. The average FPS is 98, and the minimum did not fall below 69.

But the recent hit Days Gone is extremely difficult to play, and the reason is simple: in order to get an acceptable FPS around 30, we had to lower the internal render resolution to 70%, given that the external one was already depressing 1280 by 720 in 2021. As a result, we were still able to achieve an average of 31 FPS, however, the image quality became blurry and completely unplayable.

In Destiny 2, the GTX 550 Ti performed a little better. Yes, we again had to reduce the resolution of the internal renderer, however, the average FPS was able to break through the bar of 35, and the minimum did not drop below 32, which can hardly be called a playable frame rate.

Exactly the same thing was waiting for us in Far Cry 5. We again had to slightly lower the internal resolution, which made the image extremely unpleasant. It is difficult to play with such a picture (but if you really want to, you can).

The situation in Far Cry New Dawn is mirrored with Far Cry 5.

The eFootball PES 2021 football simulator on the GTX 550 Ti was able to run relatively stable at 1600×900 (actual resolution is approximately 1366×768). However, it should be mentioned that when changing the camera to player/goal/ball/replays, FPS can drop below 50 and fall to 30, but these are essentially not game moments and they do not affect the gameplay in any way.

On average, the GTX 550 Ti dismantles 56 frames, and the rare event rate does not drop below 51 FPS. Decent result!

In general, the GTX 550 Ti will be able to give its owner the minimally comfortable gameplay in Tom Clancy’s The Division 2, however, it’s impossible to say that the average FPS around 39 will haunt you throughout the game. Division 2 is an open-world game where you will experience drops of up to 25 frames per second in places.

And again, the usual 30 FPS. Watch_Dogs 2 on the GTX 550 Ti is quite playable on a gamepad, but for a classic PC control, the number of frames is a bit lacking.

A similar situation awaited us in The Witcher. The Witcher 3: Wild Hunt on the GTX 550 Ti shows an average of 31 FPS with rare drops to 21. You can play, but again, it’s best to control a character with such a low FPS on a gamepad.

Awesome optimization! The GeForce GTX 550 Ti graphics card in World of Tanks can provide comfortable gameplay in FullHD resolution with improved graphics! The average FPS is 76, and the minimum does not fall below 47.

Below is a summary chart for testing the GeForce GTX 550 Ti graphics card in 12 games:

It is not difficult to guess the reasons for the absence of such games as Assassin’s Creed Odyssey, Mafia: Definitive Edition, Apex Legends, and Red Dead Redemption 2 in the test package. The frame rate in these projects turned out to be so low that there was practically no point in including the results in the material.

For base voltage, this is simply an amazing result! By increasing the voltage to 1.150 volts, our card was able to reach 1075 MHz for the GPU. Nevertheless, we did not raise it for tests, since even at 100% fan speed, the temperature of the GPU exceeded 85 degrees, which should not be allowed.

Remember that for such old graphics cards, high temperatures are extremely harmful and can become an additional reason for the failure of the GPU, video memory, or power system.

Let’s check how much the performance of the GeForce GTX 550 Ti has increased after such a successful overclock.

Testing the GeForce GTX 550 Ti at base frequencies and overclocking

In FarCry 5, there is practically no gain from overclocking. The only thing that can be noted is a slight increase in the minimum FPS.

Far Cry New Dawn responded with a 6% increase in FPS to overclock the GTX 550 Ti. This is not to say that this is a lot, but the minimum FPS has become a little more stable.

Another very mediocre result after overclocking. The increase in frame rate was a modest 3%.

In the last game of our testing, The Witcher 3: Wild Hunt, the increase in performance from overclocking is also practically not noticeable.

Unlike the older GeForce GTX 470, which demonstrated its worth in the realities of 2021, the GTX 550 Ti showed only its inability to “pull” single-projects with an acceptable frame rate. However, the budget representative of the second iteration of the Fermi architecture can still give its owner a relatively acceptable FPS in online projects like Dota 2, CS:GO, PES 2021, and World of Tanks.

In addition, the GeForce GTX 550 Ti video card is not as prone to the notorious “GPU dumps” as older cards, therefore, as a “plug” in order to sit out the “Era of Mining” it will do.

But remember – we do not give any recommendations! We only provide food for thought, and it’s up to you to decide whether it’s worth it.

If this material was useful to you and you would like to see more similar articles on this resource, then please support our site on Patreon! The main goal of fundraising is to expand the component park and improve the quality of testing: replacing the HDD with a voluminous SSD, buying a capture card to reduce the impact of gameplay recording using ShadowPlay on the final results, and so on).
Also, I would like to express my special gratitude to the patrons who have already signed up! Your support is extremely important for us!