What is one core capable of in 2010? Review, testing and overclocking AMD Sempron 140 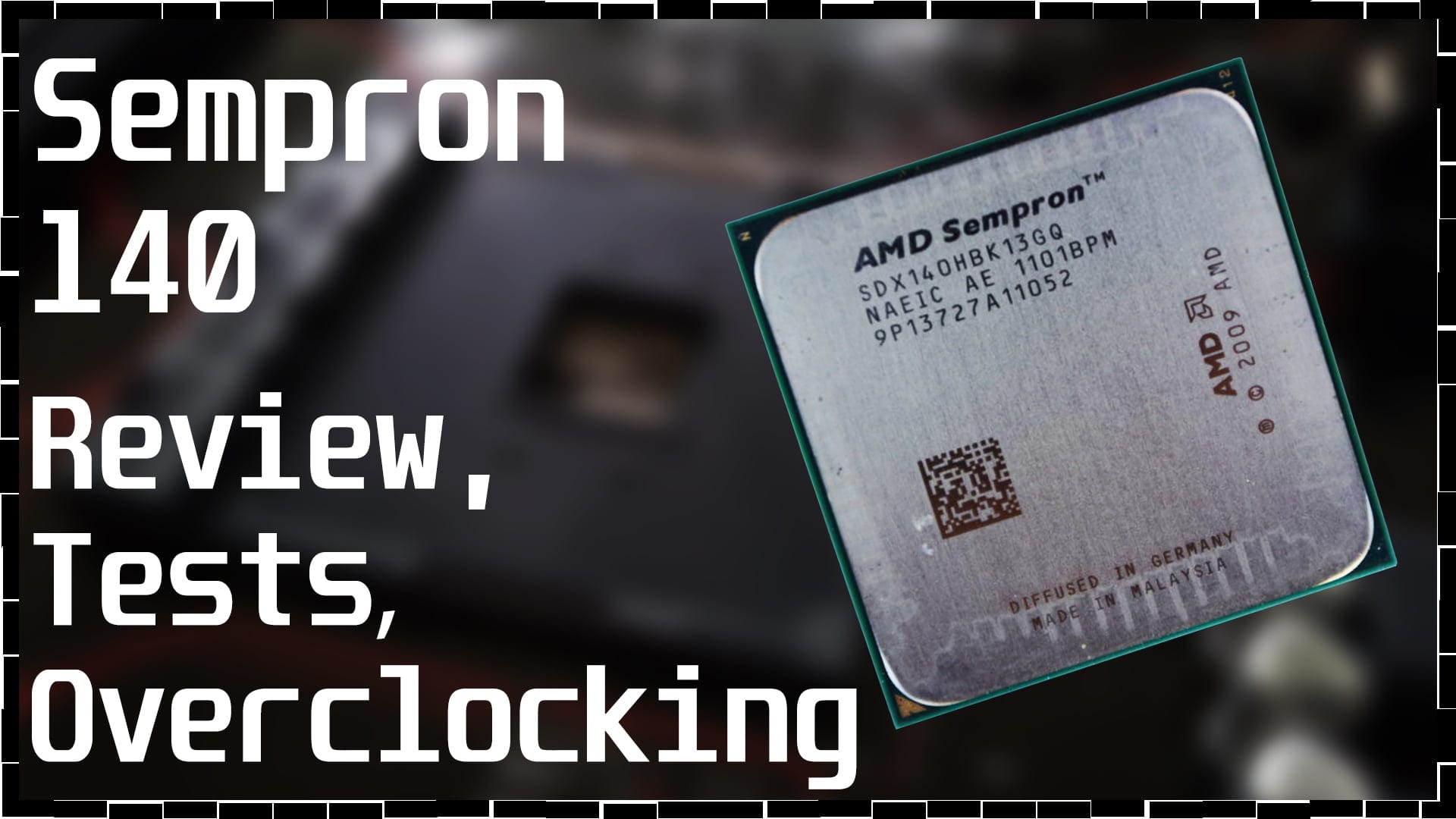 The era of single-core processors ended in 2005, when such processors as AMD Athlon 64 X2 and Pentium D appeared. But CPU manufacturers were in no hurry to remove them from the scene ahead of time. In 2007, the first company decided to take this step, it was Intel. So a pretty good budget Celeron 4xx processor came off the assembly line.

On the contrary, AMD, along with its new generation of Phenom II processors, based on 45nm process technology, decided to release an update for the Sempron processors. But there are also some nuances here, the last, 65nm Semprons had two cores, and the newcomer Sempron 140 had only one core. What could have prompted AMD to take this step is unknown, the production of dual-core processors based on 45nm process technology is already quite cheap, it would be wrong to disable one core for them.
But, perhaps, there is one bonus from such manipulations. The Sempron 140 was the fastest representative of single-core CPUs in the world, and its relative, the Sempron 145, moved it off the pedestal.

The Sempron 140 processor is built on the K10.5 architecture. The semiconductor core that powers this CPU is codenamed Sargas and is based on a 45nm process technology. Equipped with 1024KB L2 cache per core, no L3 cache on the core. Some motherboards built on AMD 710/750/810/850 series south bridges, as well as some ASRock and ASUS motherboards, allow manipulation of unlocking a disabled core in the processor. But it’s not worth hoping for this, more than 50% of the CPUs carry defective cores. This processor operates at a frequency of 2700MHz, has a thermal package of 45W, and a base voltage of 1.350V.

Let’s take a look at the processor:

The processor markings tell us nothing new, except for one detail. Its processor core has a different name – Regor, based on this, we have before us a dual-core CPU Athlon II X2 with one core disabled. The motherboard included in the test bench has an ACC function, with which there is a chance to unlock hidden cores. But alas, this instance remained a single-core Sempron 140.

Let’s take a look at the screenshot of the CPU-Z utility:

The supply voltage of the processor is slightly underestimated, this is a feature of the motherboard, and does not affect stability in any way. If circumstances arise and you get the same reduced voltage, do not panic, you can always set it manually.

It’s time to talk about the opponent of today’s test subject, to be more precise about the Sempron 3400+. This well-known representative of the K8 architecture is based on the 90nm Manila core, derived from the Windsor core, has 256KB L2 cache onboard, the base processor voltage is 1.300V, its operating frequency is 1800MHz, and the maximum power consumption lies within 45W.

As you have already noticed, the processor voltage is overestimated here, which, however, does not prevent you from manually setting it to 1.300V.

The overclocking of the Sempron 140 left an extremely positive impression. At the first attempt to conquer 4GHz, the board showed POST affably and went to reboot. The desire to conquer this coveted mark for all AMD processors did not leave me, and I decided to increase the supply voltage to 1.550V, but this did not even allow me to boot Windows. Having abandoned this venture, I reduced the reference frequency from 300 to 290 MHz, which allowed me to boot, but there was still no sign of stability here:

Overclocking the Sempron 3400+ rested on the ASUS M2V motherboard, of course, I don’t argue that the positioning of this motherboard has never been “for overclockers”, but no one will buy a “top-end” motherboard for Sempron. So the overclocking stopped on the 274MHz bus, which gave the resulting frequency of 2466MHz:

Well, the overclocking of the Sempron 3400+ cannot but depress, but as tests have shown, 3000 MHz would not be enough for it to catch up with the opponent in nominal value.

The total superiority of the improved architecture and increased cache memory in the rendering test suites. Sempron 140 at 2700MHz shows results that are almost twice as high as the Sempron 3400+!

In synthetics that actively work with the ALU, the results start to drop slightly, the superiority of the Sempron 140 over the 3400+ at base frequencies tends to around 70%. Overclocking the Sempron 140 takes it to a completely different league.

In the WinRar archiver, the advantage of the new item even reaches 20%, moreover, overclocking has not brought almost any dividends, in contrast to Sempron 3400+, which noticeably accelerates from overclocking. The semi-synthetic gaming benchmark 3D Mark Vantage again brings the Sempron 140 a nearly 90% lead over its opponent.

The first game in our test and the Sempron 140 shows a 90% increase in the frame rate change in front of the competitor, which works the same as it does at the base frequencies, and a 60% advantage over the overclocked competitor! With overclocked to 3780MHz, the coveted bar of 30 FPS and a minimum of 22 FPS comes!

The frame itself is certainly not playable, but look at the superiority! 110% at rated frequency and about 90% in overclocking!

Sitting down to benchmark this processor, I knew that in front of me was the world’s fastest single-core desktop CPU. But I could not even imagine how much it is ahead of the processors of the previous generation! Its rival, the Sempron 3400+, suffered a complete fiasco, and this is not the fault of its low frequency, but most likely due to the work on the mistakes that AMD forgot to do before the Sempron was released on the Manila core.

If gaming performance is not a big deal for you and you are worried about energy bills, then this processor is for you. And don’t forget which core it is based on, namely Regor. Unlocking cores is a bigger lottery than overclocking, but some are lucky. At the time of this writing, its cost is $ 44 for the BOX version, and the cost of the dual-core Athlon II X2 210e is $ 57 for the tray version, whether the second core is worth a $ 13 surcharge is up to you.