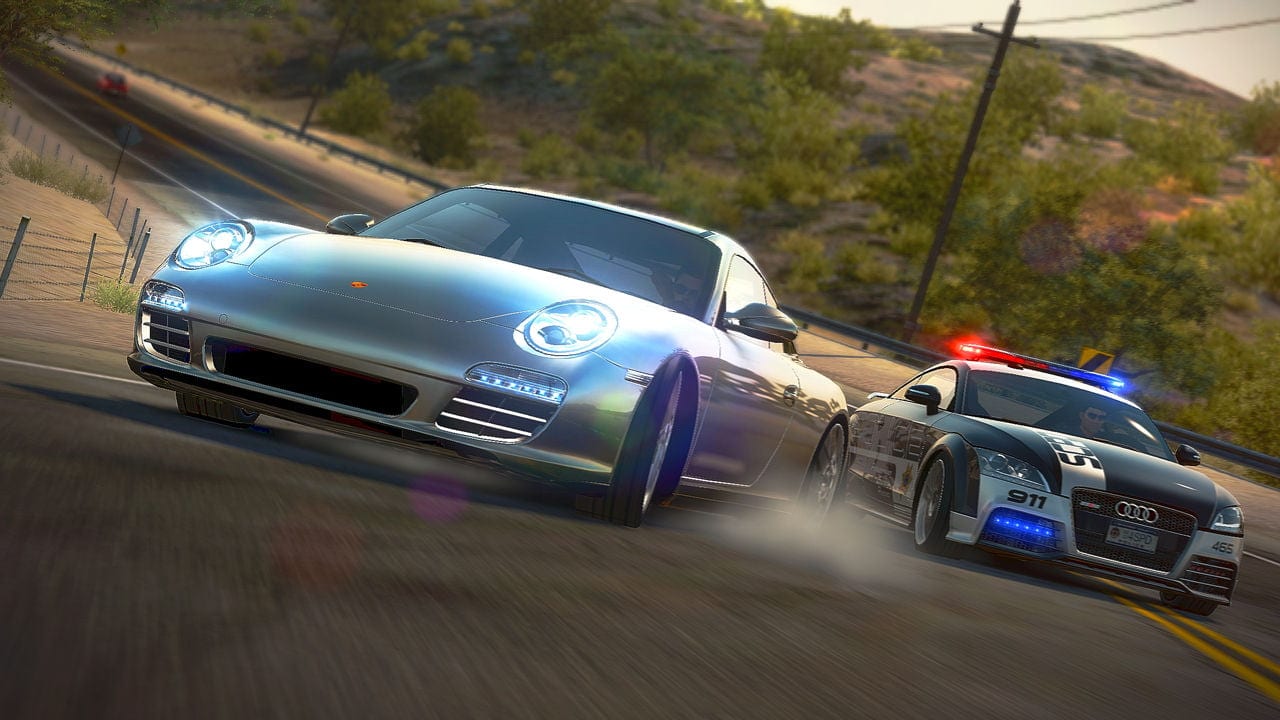 Nostalgia, perhaps this word can describe the feeling that came to me during the first race in the new creation of “electronics”. Memories of the good old NFS HP2 immediately began to pop up in my head. But something is still wrong here. What? The graphics are better, the controls have not changed at all (all the same logs smoothly rolling along the road). But only after three races, I suddenly realized that the new HP is not as boring as the last one! We all remember very well what racing in HP2 is, two or three longest laps, rivals are half a lap behind, in short, you play as if by yourself. This was the case in the days of EA. Now the game was being developed by the famous Criterion Games team for some time now.

But let’s talk about everything in order. When you first start the game, you are offered to create a profile, and concurrently register in a new “chip” from EA – Autolog. The gamer community was very upset about this. No, not the novelty itself, but the fact that without it it is impossible to play on the network. And so, after a possible registration, we are shown a video of the future NFS Shift 2! I was very impressed by the falling off wheel in the video, now it’s up to the small thing, the “electronics” need to do it in the game.

A little overwhelmed by the imminent release of the next NFS, I continued to wander through the “rich” menu of the game. Naturally, the first thing I did was wander into the graphics settings, and was overwhelmed by the lack of anti-aliasing! And as practice soon showed, texture filtering is available only on AMD / ATI video cards, on NVIDIA there is no such setting at all (tested on two different systems equipped with different types of video cards: GeForce 9800GT / GTX280 and Radeon HD4670)!

Well, okay, it’s not the graphics that paint the game, but the gameplay. Let’s move on to inspecting the size of the map:

Well, not much. We are offered about 30 different tracks. But there is a nice bonus, free mode. The player is given a chance that HP2 fans never dreamed of! You can move around the expanses, if not forever, then for quite a long time, since the graphics in the game allow you to enjoy the scenery to the fullest.

The first musical composition that meets the player will be performed by the world famous rock group 30 Second to Mars. Subjectively, this is the only composition not annoying in the game.

As I said at the beginning of the article, the car on the road is a log from the mountain. The control is one step better than in NFS Shift, but perhaps not a step forward, but to the side.

Did everyone expect this game to damage Burnout? Didn’t wait. The machine does not collapse, does not shrink into an accordion, it wrinkles gracefully. Although, if you remember everything that was in NFS, this is a huge step forward.

The gameplay, although tied to the good old “catch up > overtake > run away from the cops > be the first”, but with a smarter AI, it looks very, very pleasant, sometimes even exciting. Quite interesting missions for the cops. Although the new “check on time” is very annoying. Hit the side, -2 seconds, at first, it was difficult to get used to. If you remember NFS MW / Carbon there you could only rub against them. Another thing is Dirt 2 … oh, it got a little wrong. Yet these are very different types of races.

It turns out interesting. The game is beautiful, even without anti-aliasing, the textures are not bad, at the speed no one will really look at them. Shadows are as sharp as the engine allows. Machines, well, it has always been at the height of the NFS series. And gamers are complaining! For what? Yes to optimization! The video card is ~ 50% loaded during the game! It’s on almost any video card! Whether it’s the Radeon HD4670 / HD4890 GeForce GTX260 / GTX280, it’s the same everywhere. At the time of this writing, the first released patch was in use. He, as stated by EA, should have adjusted the game to work with multi-core CPUs, but, as I noticed, the increase was ~ 1-2fps.

I’ll add something else to this section:

Trying to play HP NFS on systems like this:

This system showed the lowest result. 5-7 frames at the minimum, the average settings of this system did not obey, the playability was so low that the splash screen before the race lasted two minutes.

The game runs at maximum quality settings, on average, 45-60 frames per second.

The game runs at maximum quality settings, on average 35-50 frames per second.

Perhaps the most successful option, the game runs smoothly, without jerking, on average, and at a minimum of ~ 60 frames per second.

What should I write at the end? Over this I puzzled half the night. But nothing sensible came to my mind, so I’ll get by with banal stuff.

Still, the game came out pretty good. Beautiful and sometimes even impressive graphics, a good model of car damage (for NFS), but at the same time, meager music, although it may seem ideal to some. Inappropriate behavior of the car on the road, the same type of races boring by the middle of the game.

But, perhaps, this is the most successful Need for Speed ​​in the last 5 years.